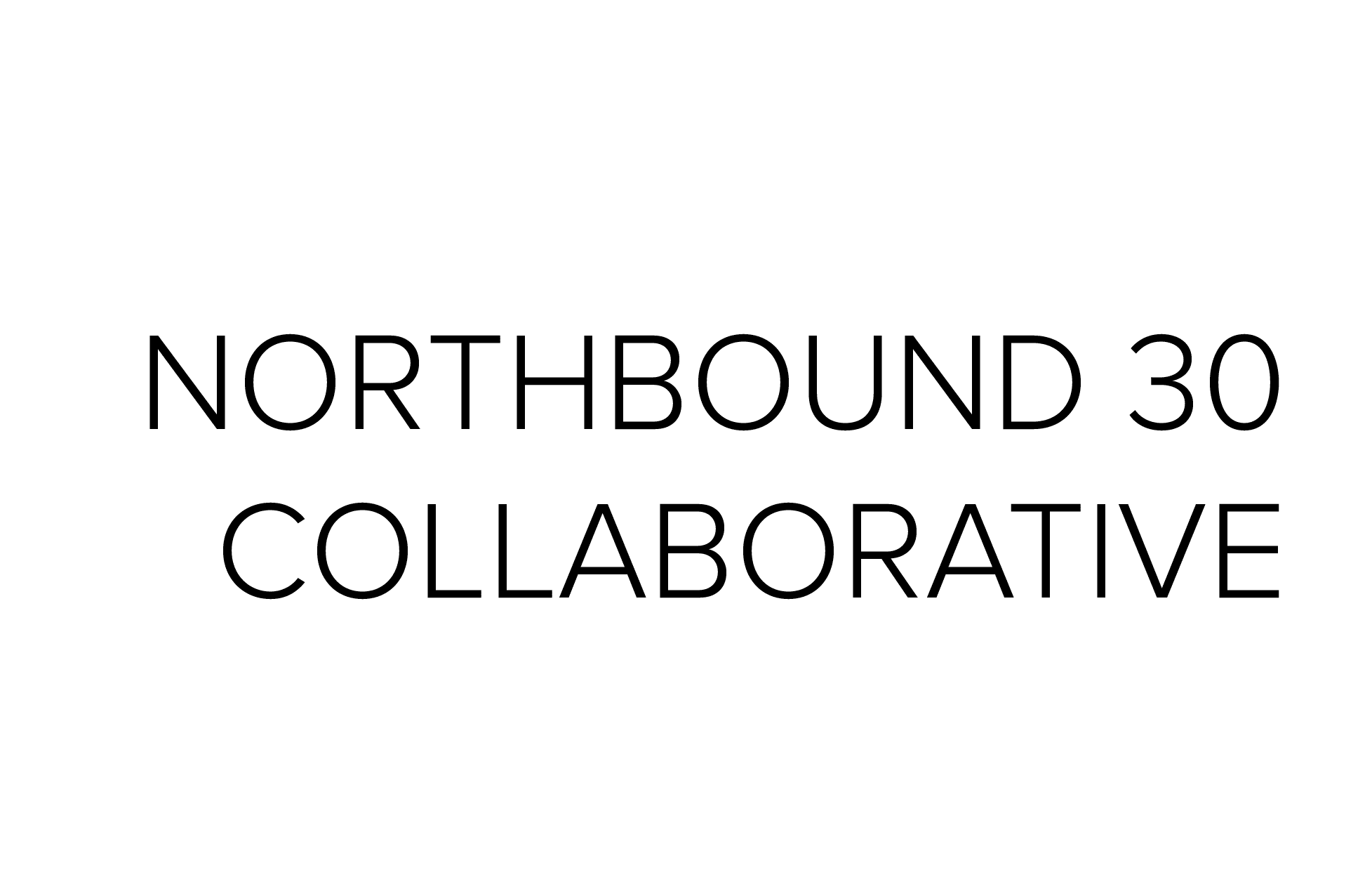 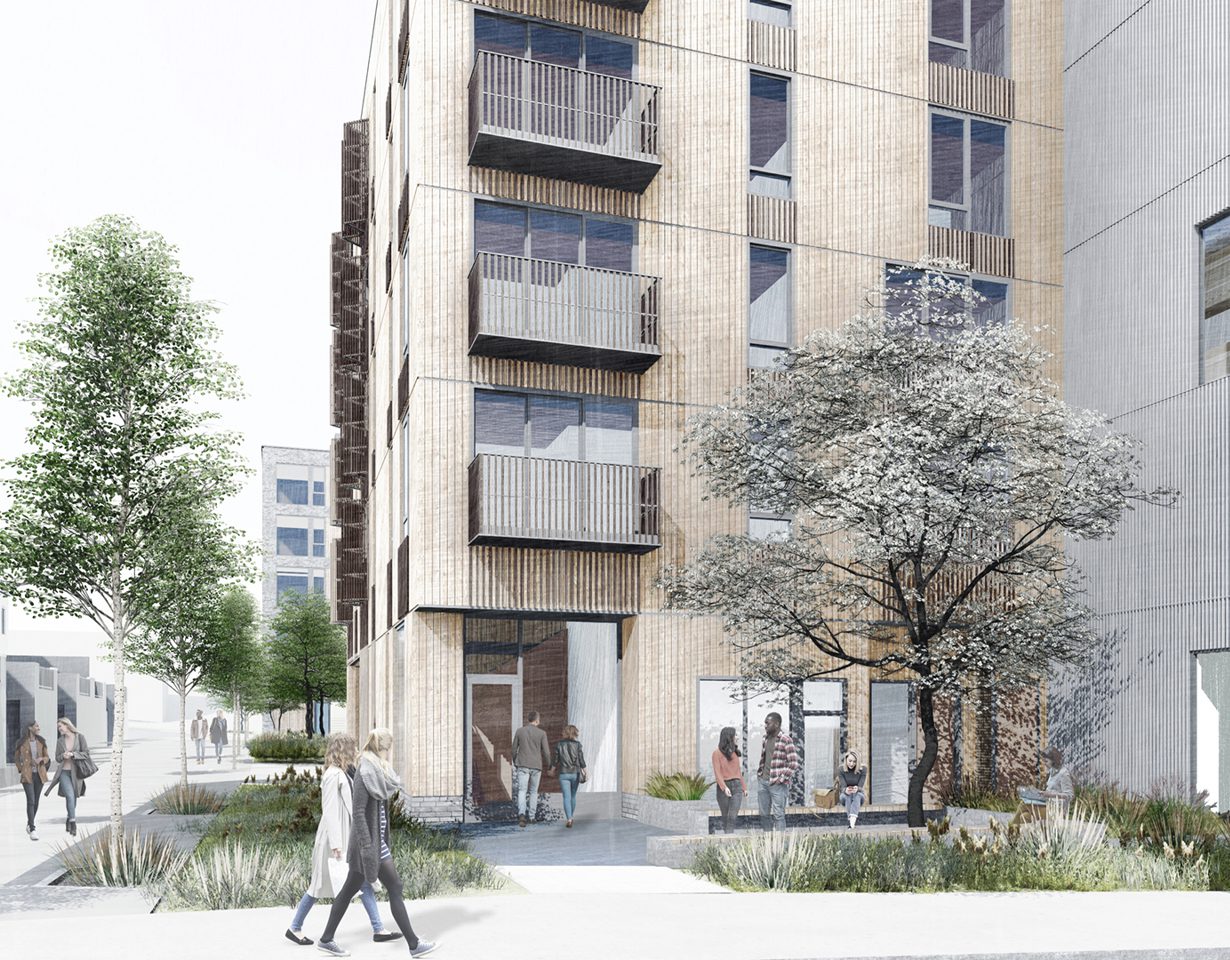 Located in a rapidly evolving neighborhood in NW Portland, Northbound 30 Collaborative is a multi-family residential project made up of eight mass timber buildings. Situated near major employment centers, one of the nation’s largest urban forests, as well as near a local cultural institution, the development will provide a vital residential heart to an area already rich in activity.

The site originally housed Royal Oak Metalcraft, a metal fabricator, whose business transitions led to a property sale. Its proximity to walkable and appealing neighborhoods made the industrially-zoned land valuable as a site for housing. In 2015, Jones Architecture helped the owner, Cairn Pacific, with conceptual studies for portions of the property. Cairn Pacific took the parcel through the land use zoning change process, transitioning the industrial zone to Central Employment, a designation that allows dense mixed use and multifamily housing development. The change was not without controversy. There are competing demands within Portland’s city limits on both industrial land, which is in scarce supply, and housing, which is also in high demand in the burgeoning city. Given the site’s proximity to the city’s second largest office building, Montgomery Park, and the industrial employment zone to its north, the recreation opportunities embodied in Forest Park, as well as its adjacency to the pedestrian-friendly Alphabet District, the zone change allows the parcel to create more housing close to both jobs and amenities Portlanders seek.

The parcel represents a nexus within its neighborhood.  The Northbound 30 development connects with a neighboring townhome development and the future site of a local cultural institution: the projects have developed a symbiotic relationship, sharing site access and circulation areas. The charming Northwest District lies to its south, while one of the city’s industrial sanctuaries sits across Highway 30 on its northern edge. In a symbolic sense, the site could also be viewed as a link from Portland’s industrial, manufacturing history to its newer identity as a locus for the creative and design-oriented fields. The project’s concept is innovative. First, a larger parcel was broken into eight smaller lots, each at approximately 5,000 square feet. This size is in keeping with Portland’s historic single-family residential fabric. However, instead of single-family homes, the sites will house 5-story multifamily buildings with 18-19 units each.

To keep the overall design rich and varied, the site plan was developed in collaboration with Waechter Architecture. The two-firm team decided to work in an alternating pattern, with Jones designing lots 2, 4, 6, and 8 and Waechter taking on lots 1, 3, 5, and 7. The site parti has a shifting figure-ground, or checkerboard approach, maximizing the use of the entire development’s available space. 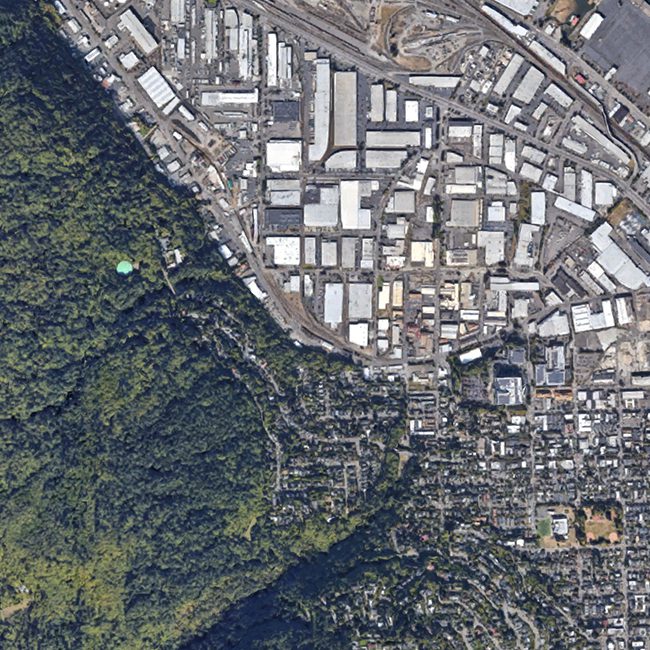 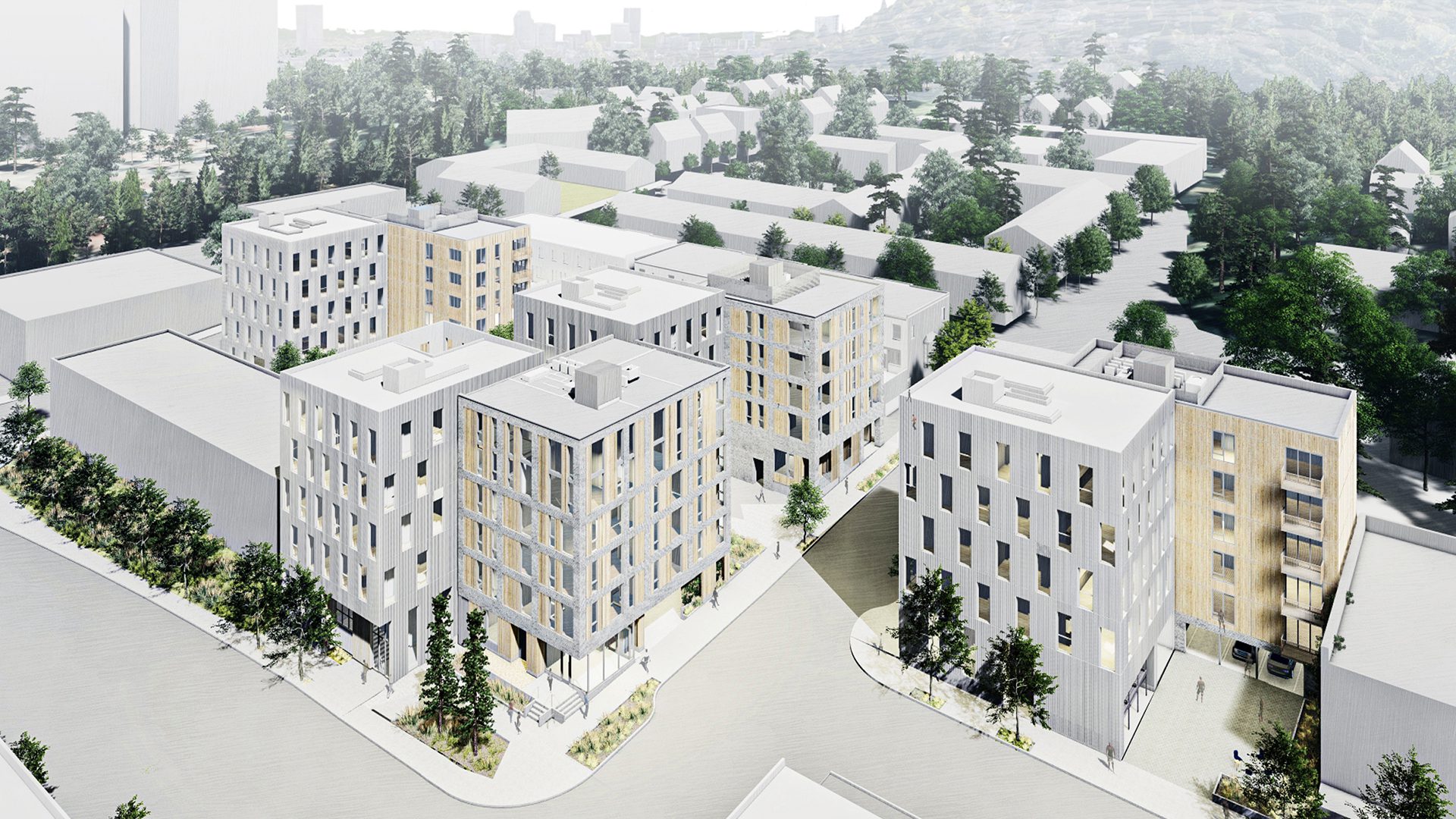 The checkerboard site plan provides outdoor courtyard spaces adjacent to each of the eight buildings. Early in the design process, the team decided to place a no-build easement on each lot. The approach allows one site’s building to make use of the open space of the neighboring property, and also allows the placement of windows on property lines adjacent to flexible courtyard spaces. For example, a courtyard on lot 3 provides light, air and egress for buildings on lots 2 and 4. This site design offers an innovative approach to public space not yet seen in Portland.  Courtyards act as outdoor living rooms and site circulation. They are conceived to allow gathering places for residents to hang out, tune up a bike, or read a book. They are collaborative, communal spaces that echo the small plazas folded in to the neighborhoods of European cities. They also double as shared pedestrian and vehicle circulation, providing access to tuck under parking.

Buildings 2 and 4 line the more urban edges of the site. These structures meet the sidewalk, allowing the development to rub shoulders with its built-up neighbors. The buildings’ brick framework takes cues from neighboring Montgomery Park and other nearby early twentieth century industrial properties. Wood cladding fills in the recesses, signifying the residential nature of the activity within. Buildings 6 and 8, interior to the site, employ a softer approach. They are clad entirely in wood with a vertical expression that is inspired by the trees and textures found in Forest Park. These buildings read more clearly as residential, with balconies and entries set behind vegetated courtyards. The two languages play off each other and all four buildings celebrate the narrow proportions of their individual sites.

The eight buildings will be unified in their use of mass timber as the primary construction material. The project joins a growing number of buildings in Portland and the Pacific Northwest to advance the use of cross laminated timber construction. It is also a means to firmly root the structures to their region, using climate-friendly materials grown and manufactured here.

The selection of Waechter and Jones has been fortuitous. The two firms are well suited to collaborate, sharing philosophies in the design approach to the pedestrian realm, urban spaces, and designing within cities. The two firms also apply a high level of care and design acumen. While the firms chose to diverge in the architectural language and expression, common values created buildings that work as a coherent whole. 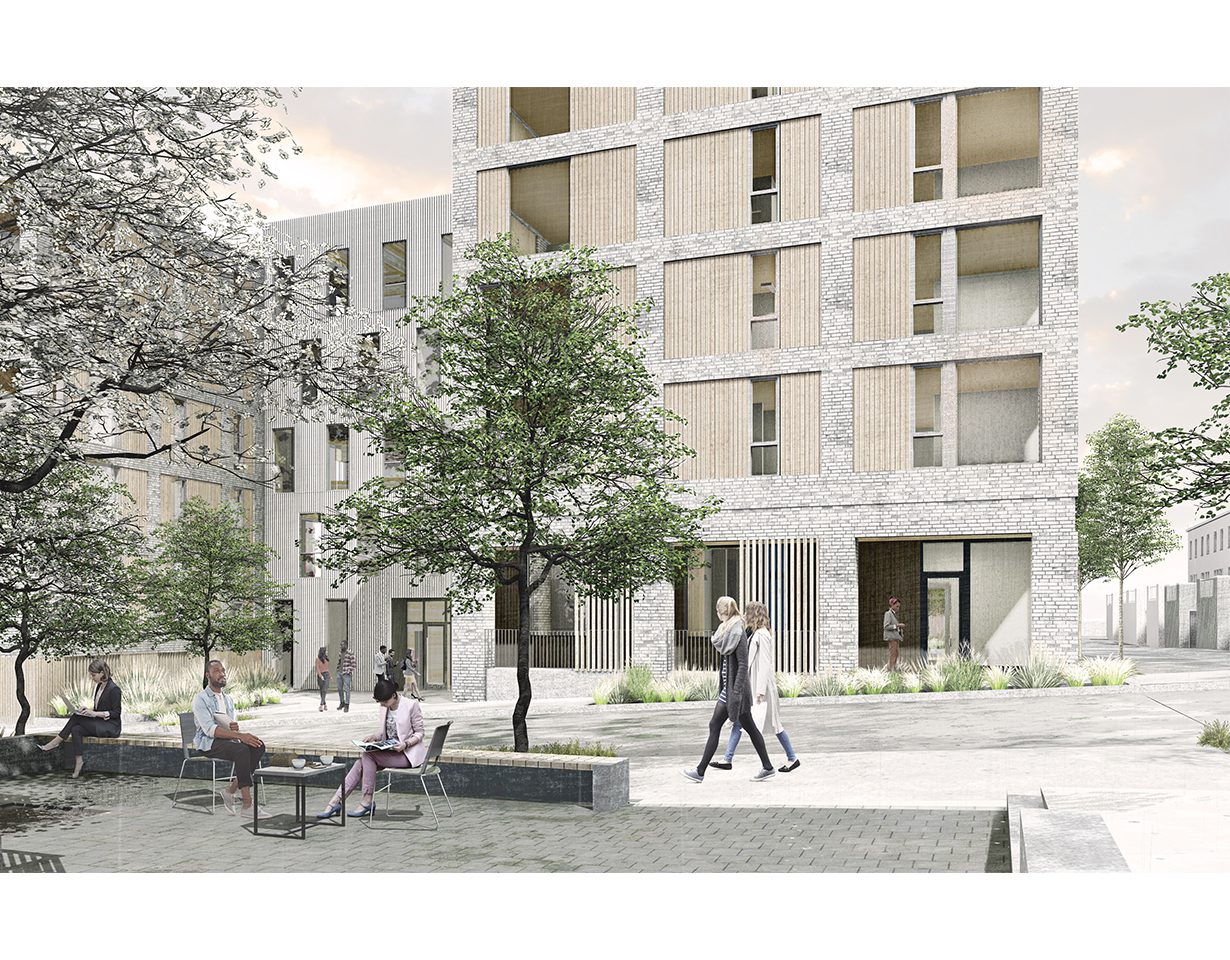 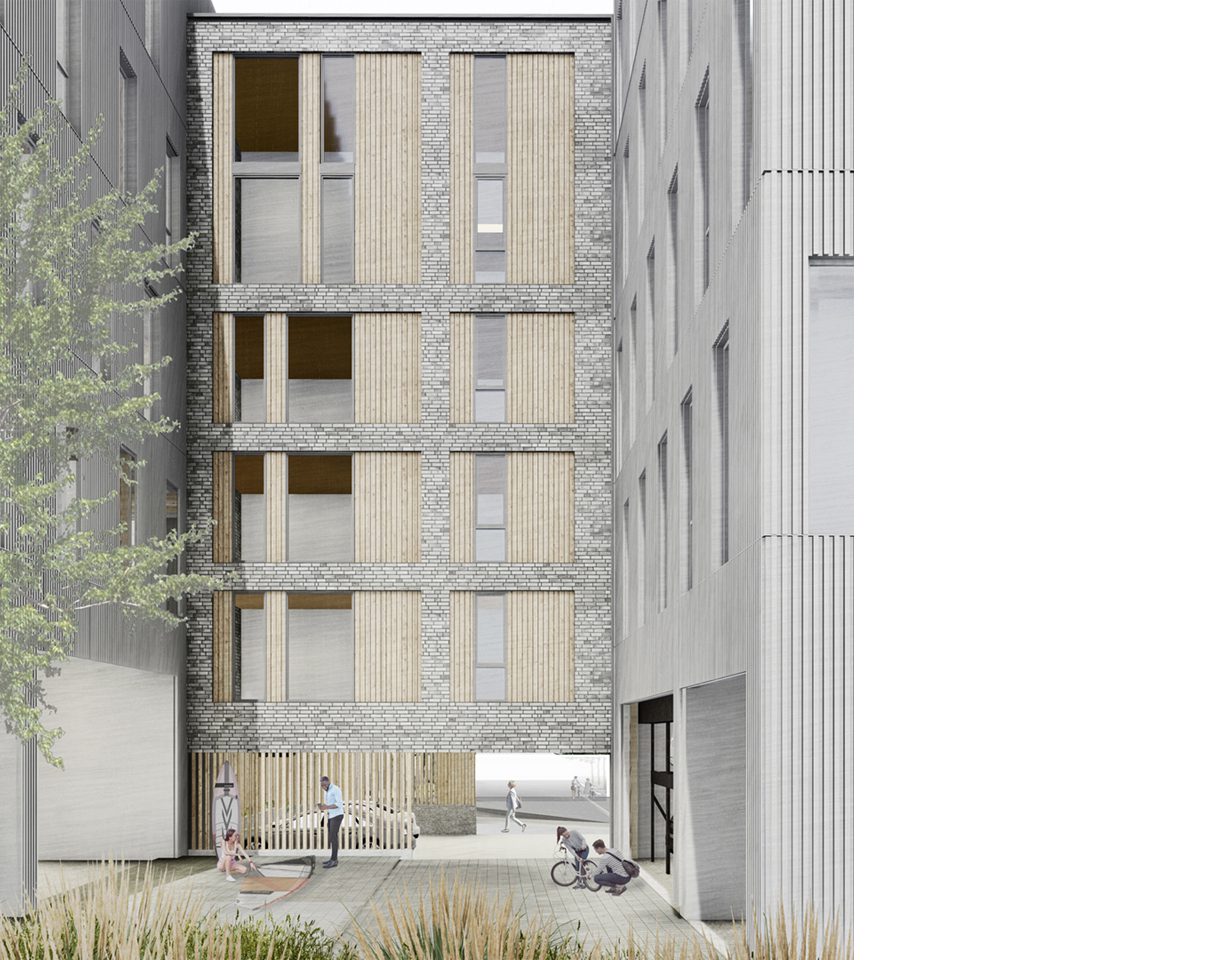 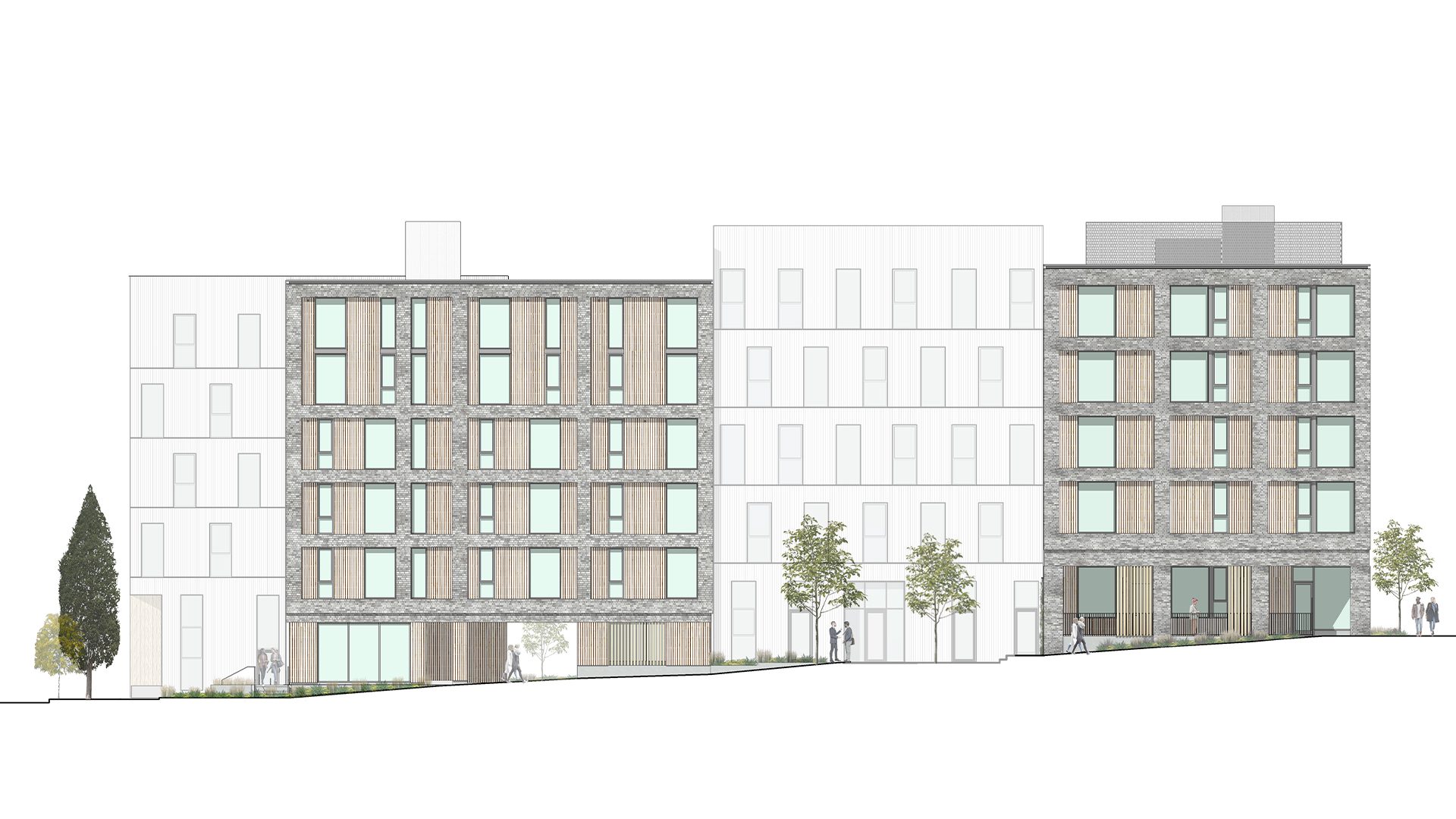 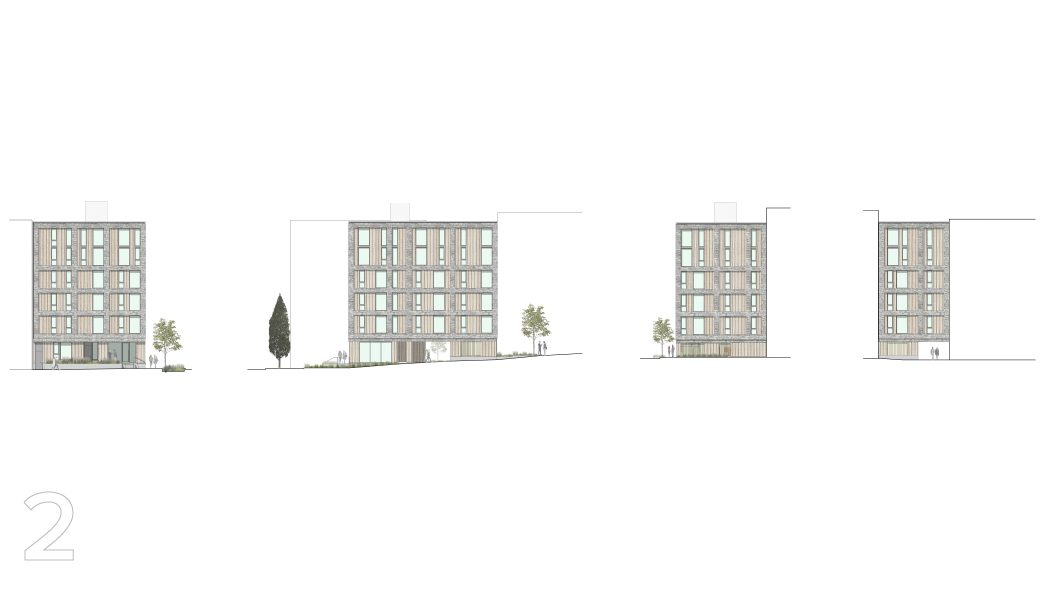 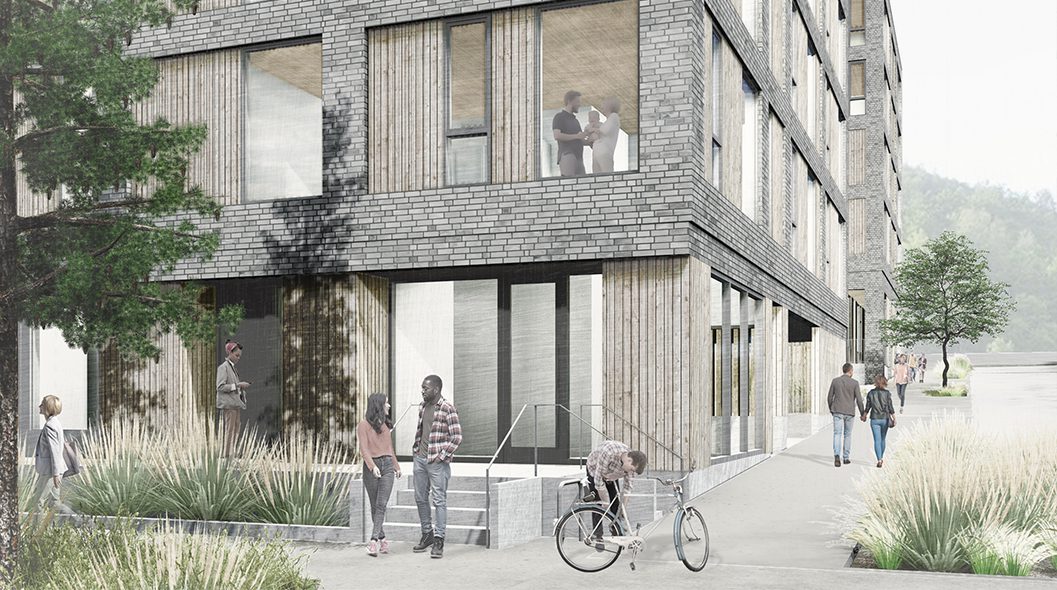 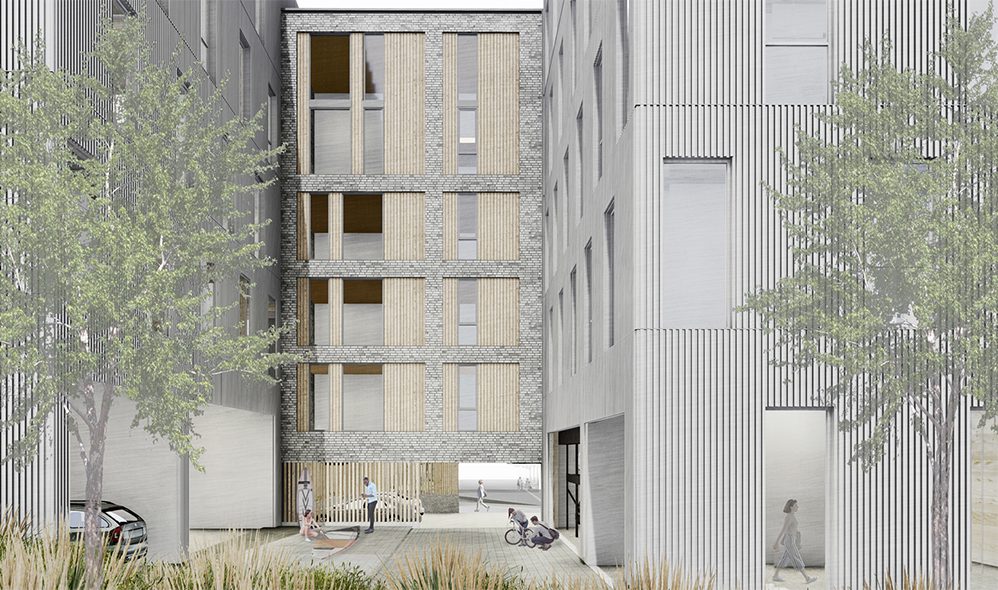 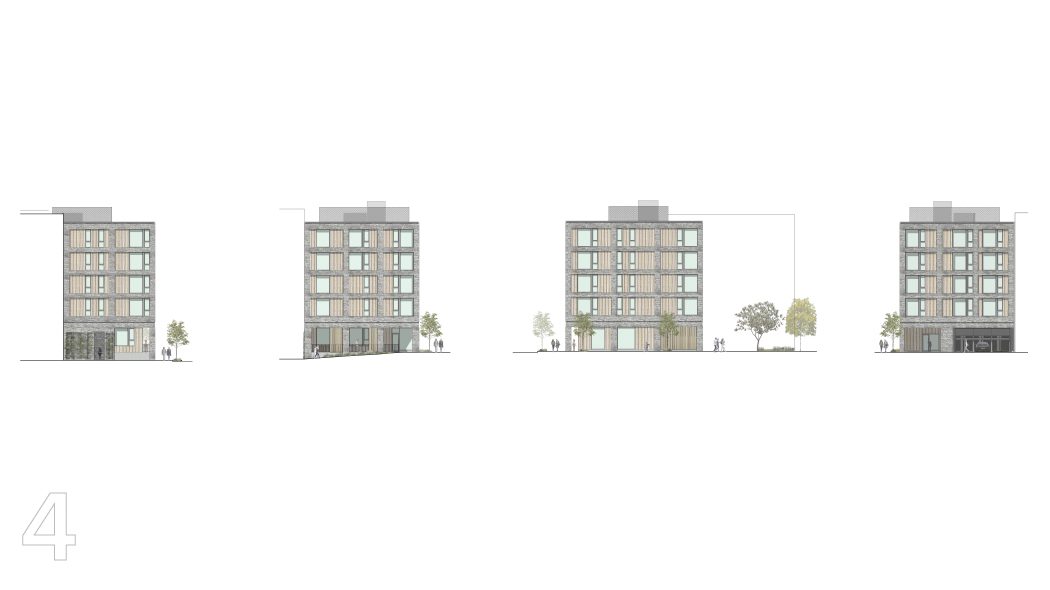 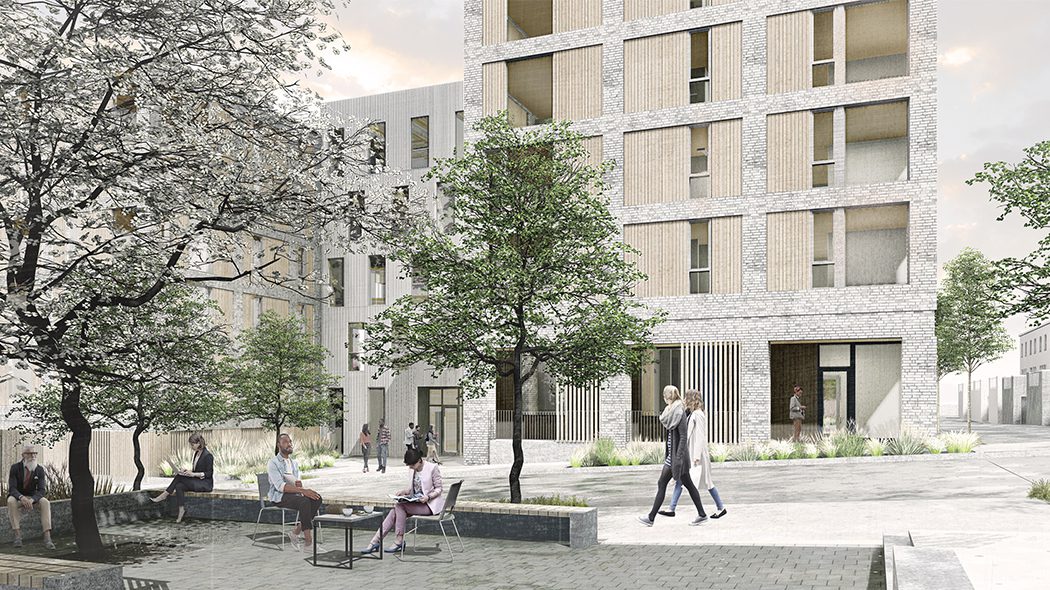 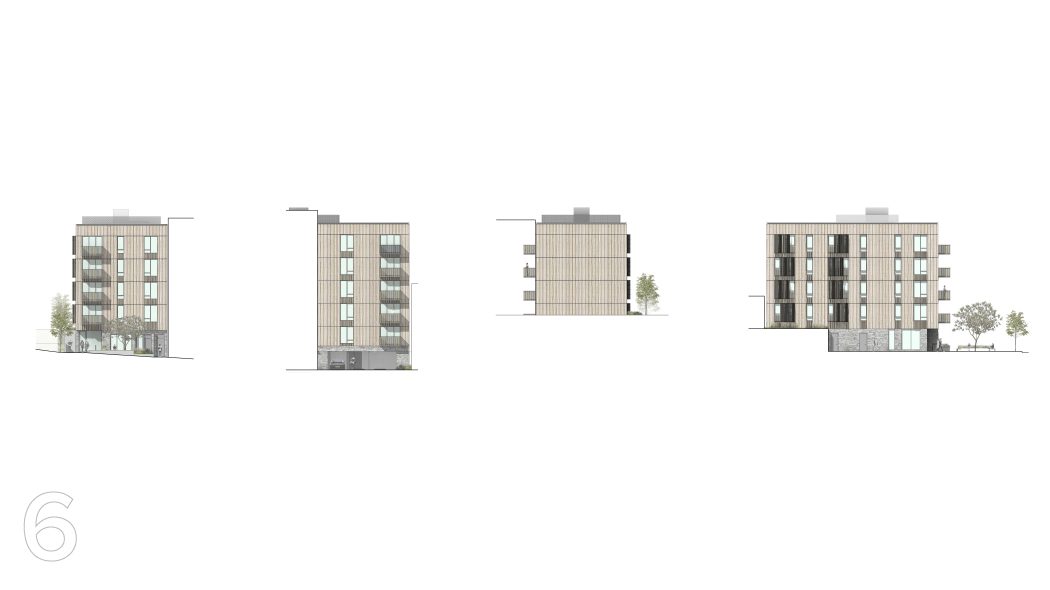 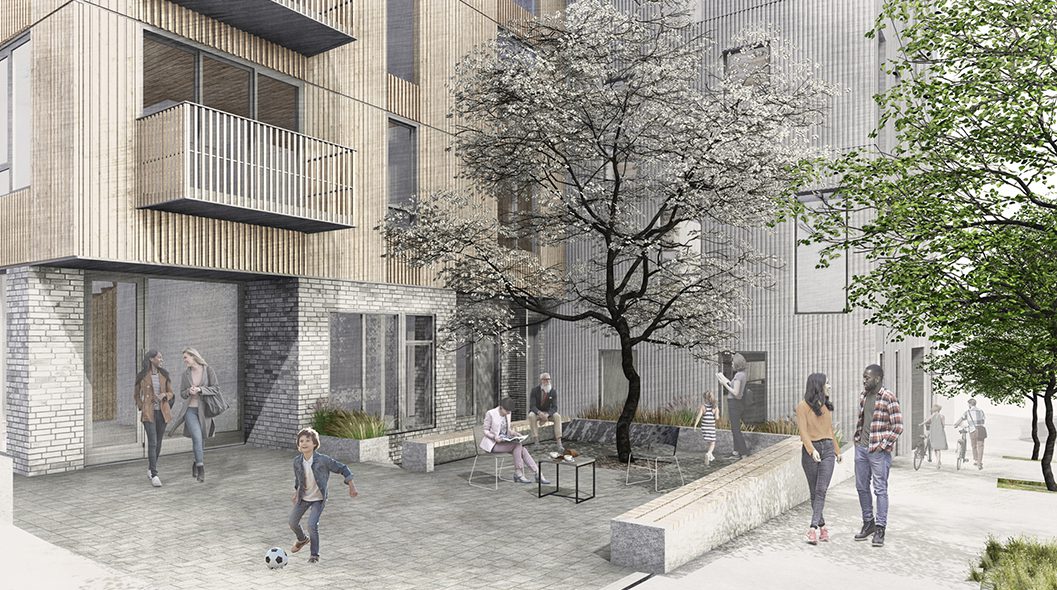 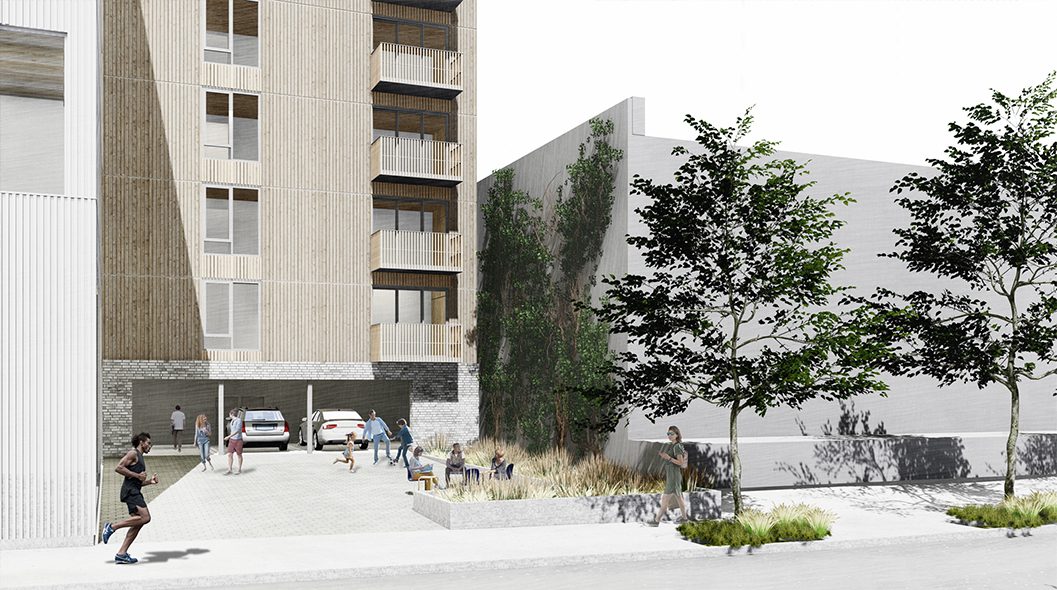 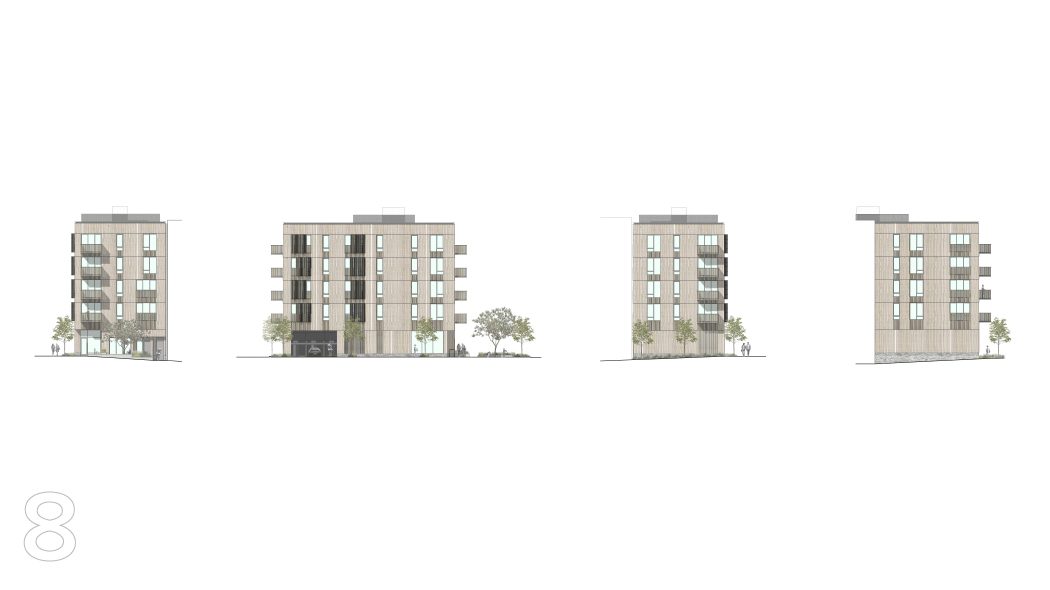 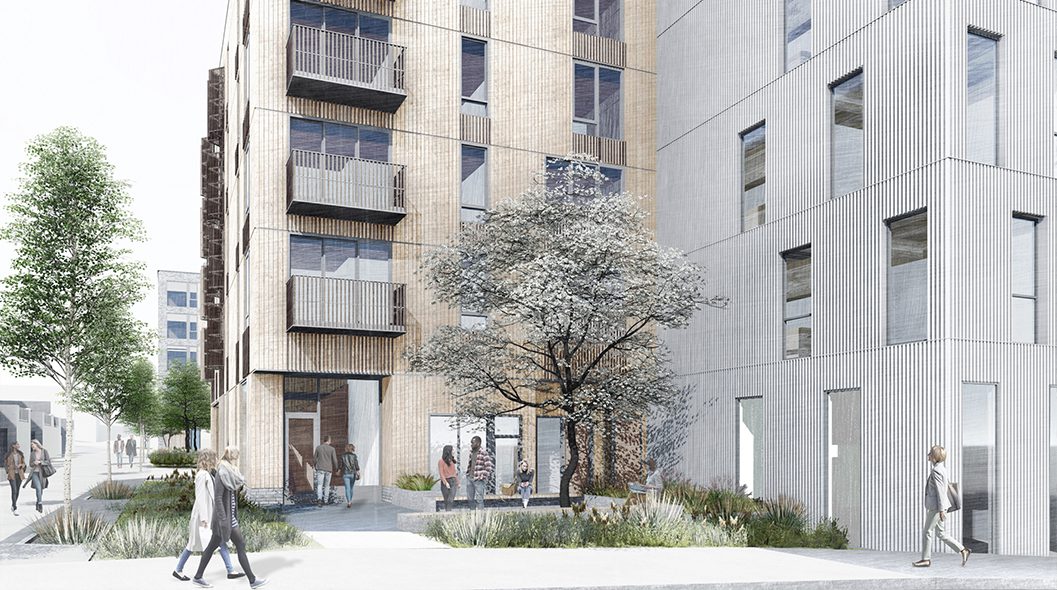 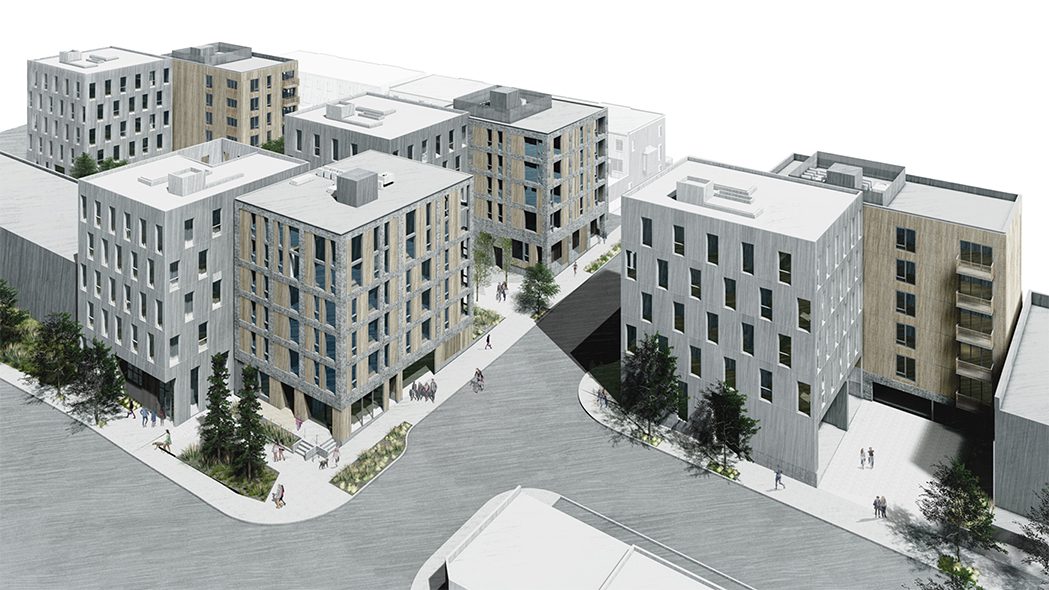 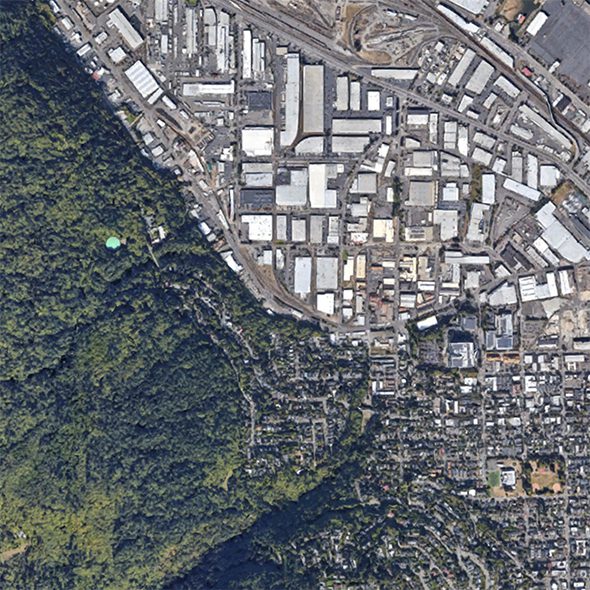 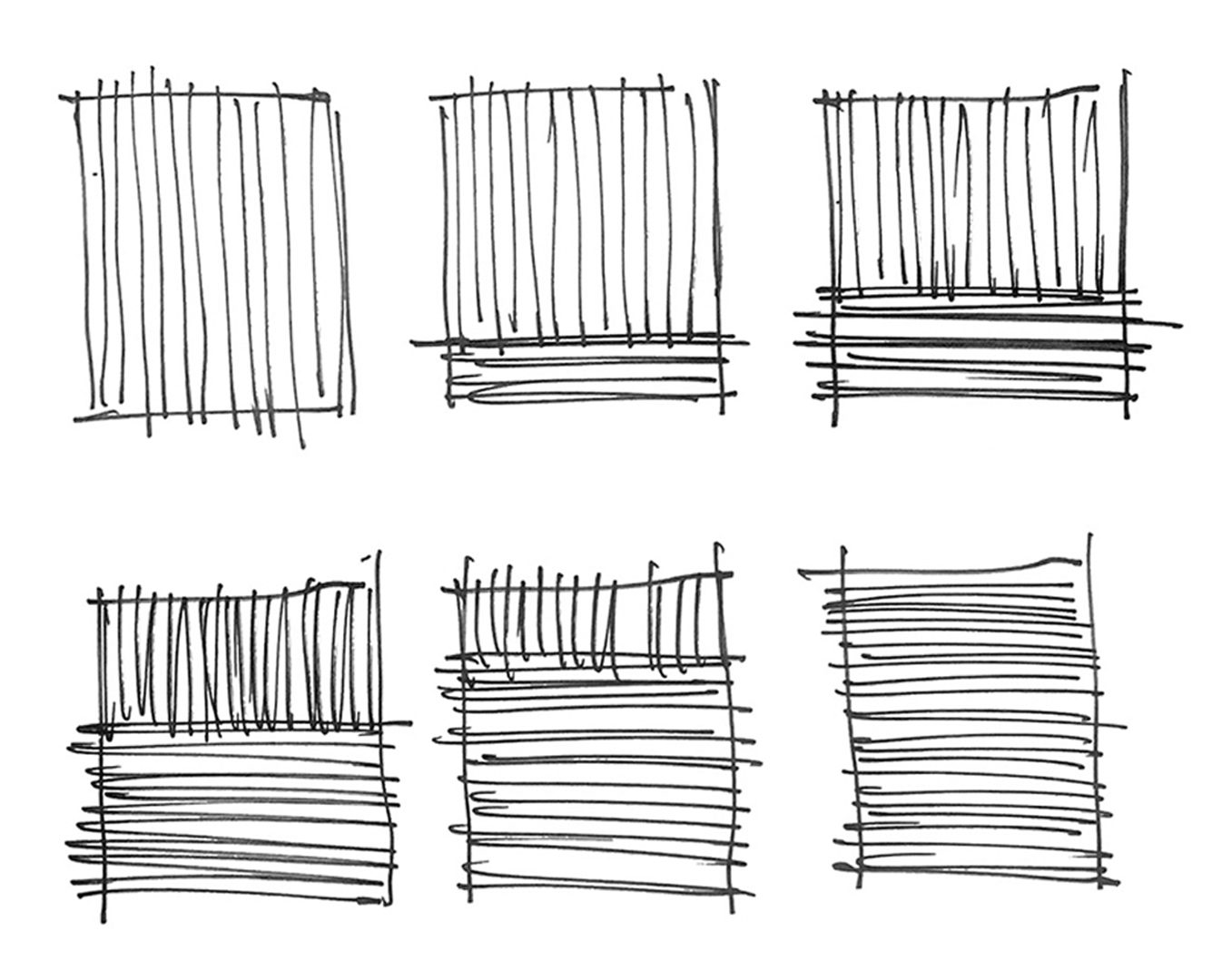 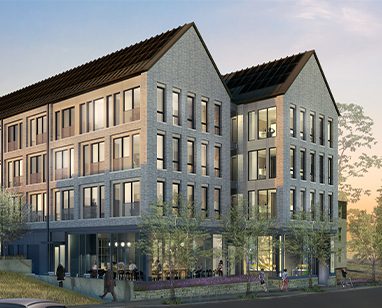 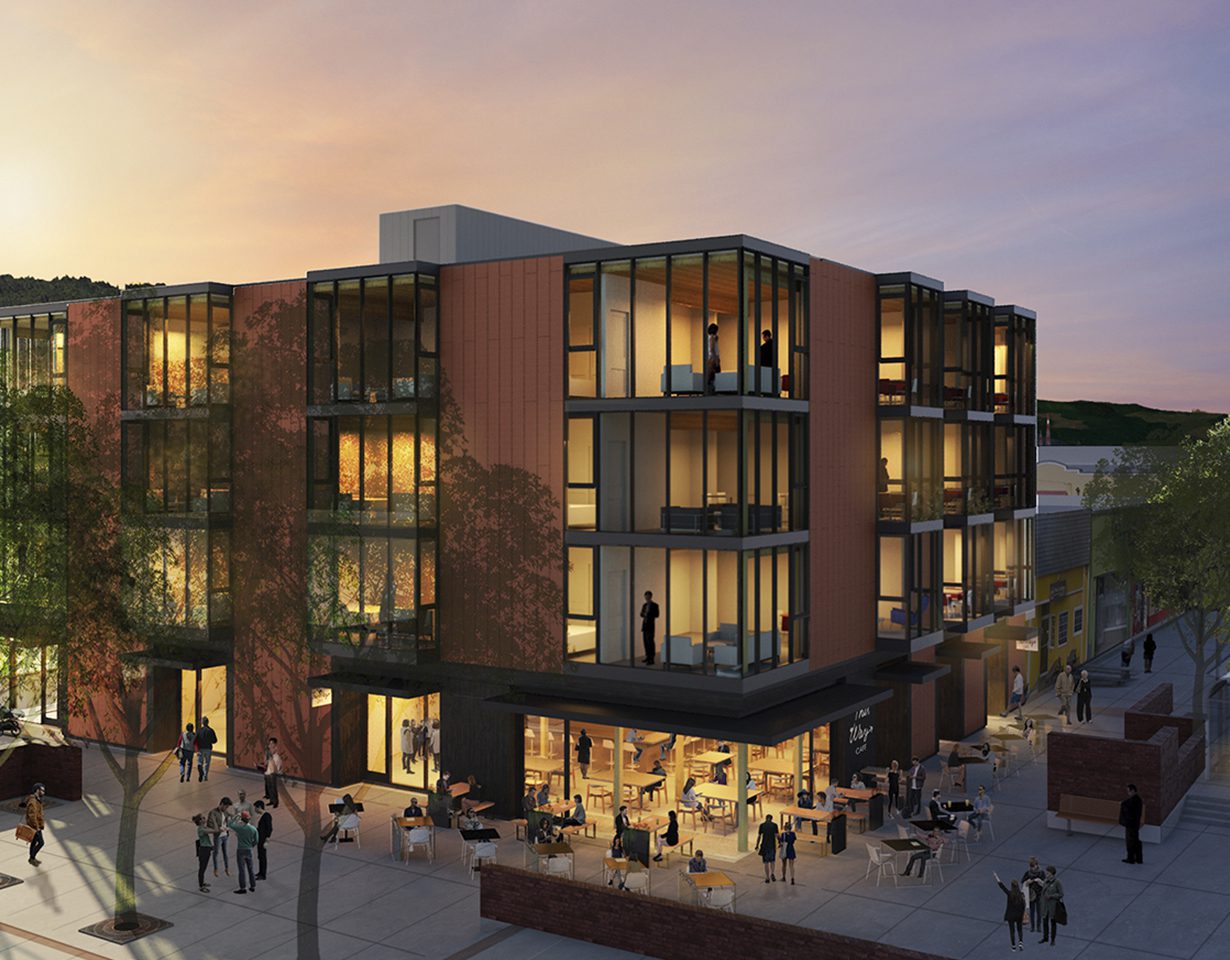